Rehab for Co-occurring Depression and Addiction

Depression and addiction are two of the most common comorbid conditions.

This dual diagnosis can be effectively treated in a comprehensive rehab program.

What Is Major Depressive Disorder?

Major depressive disorder (MDD) is often referred to as clinically significant depression or clinical depression. MDD represents a form of mental illness that can only be diagnosed when a person meets specific diagnostic criteria.

People often report being “depressed or “feeling depressed,” but this is not necessarily the same thing as MDD. Major depressive disorder does not represent usual mood fluctuations that occur in daily life. It represents a clinical syndrome.

The diagnosis of MDD cannot be made when the symptoms are due to the direct use of drugs or alcohol or the direct result of some other type of medical conditions.

How Is MDD Diagnosed?

There are several major qualifiers to differentiate MDD from normal fluctuations in mood and other conditions that might produce depressive symptoms.

First, the person must have a persistent feeling of depressed mood or an inability to experience pleasure that leads to significant distress or impairment in functioning. These symptoms must occur most of the time over a minimum of a two-week period.

There are no medical tests, laboratory tests, or brain scans that can be used to formally make a diagnosis of MDD. Instead, clinicians evaluate the behavior, emotional state, and level of distress the person displays to diagnose the disorder.

The Diagnostic Symptoms of MDD

The American Psychiatric Association (APA) lists the formal diagnostic criteria for MDD that consist of nine specific diagnostic categories. A person must meet the criteria for five out of the nine categories of symptoms for a two-week period.

In General, The Symptoms of MDD Include the Following:

People may display a significantly depressed mood, but they may not have MDD. Other issues that may lead to depressive symptoms include:

Trained clinicians must be able to tease out depressed feelings that are associated with other types of psychiatric conditions from a formal diagnosis of MDD. However, it is not unusual for MDD to be comorbid with other psychological disorders including substance use disorders.

When the direct effects of substance abuse cause depression, such as the depression that often occurs during withdrawal from stimulants, MDD is not diagnosed.

Typically, when it can be determined that a medical condition or the use of drugs or alcohol directly causes depression, treating the medical condition or substance abuse will result in a significant improvement in depression. When the person has both MDD and a substance use issue, treating one of the disorders will not typically result in a significant resolution of the issues associated with the other disorder.

The exact relationship between substance abuse and depression is complex.

There is no formally stated relationship that can definitively identify that MDD causes substance abuse or that substance abuse causes MDD. The risk factors associated with an increased probability to develop MDD or a substance use disorder are similar, such as genetic and environmental factors.

Common Substances of Abuse in People with MDD

The clinical research has long identified that a high proportion of individuals who are diagnosed with MDD also have some type of co-occurring substance use disorder. The general estimate is between 30 and 40 percent.

According to the APA, the most common substances of abuse in individuals with MDD include the following: 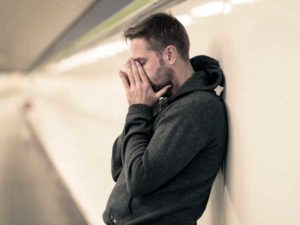 Individuals with MDD who are actively suicidal need to be placed in inpatient treatment programs that are specialized for this purpose.

Suicidal ideations must be addressed to protect the person from self-harm. Once they are deemed to no longer be actively suicidal, they can be transitioned to a different program, but they need to be closely monitored.

Individuals who were previously suicidal and begin treatment are at an increased risk for suicide once the treatment takes effect. This is because they tend to have more energy and start to reflect on their situation. The combination of increased energy, reflecting on how they have disrupted their lives, and being in treatment can often rekindle suicidal thoughts in the early stages of recovery.

As a result, those with suicidal tendencies need specialized treatment.

The general approach to treating anyone with dual diagnosis is to treat both issues together. This means that the depression will be treated along with the substance use disorder.

Attempting to treat either disorder alone and ignoring the other disorder often leads to significant problems with relapse and increased issues with depression.

The treatment of dual diagnosis is often referred to as an integrated treatment program that recruits specialists to address both of the co-occurring conditions. The team develops overall goals for the client, and specialists treat the client accordingly.

Because depression and addiction commonly co-occur, most rehab programs can address MDD along with substance abuse. The approach is to use a combination of medications and therapy to treat both issues. This includes medications to address withdrawal symptoms during medical detox, antidepressants, therapy, and peer group participation as well as other adjunctive interventions.

Some rehab centers may include interventions that may not be fully covered under one’s insurance. Always check with the insurance provider to determine the amount of coverage for any particular service.

The best way to determine which program might be best is to sit down with intake personnel and discuss how the issues are treated within the program. Because the majority of legitimate rehab programs attempt to follow the principles of effective substance use disorder treatment as outlined by the National Institute on Drug Abuse, common co-occurring conditions like depression are addressed in the majority of these programs.